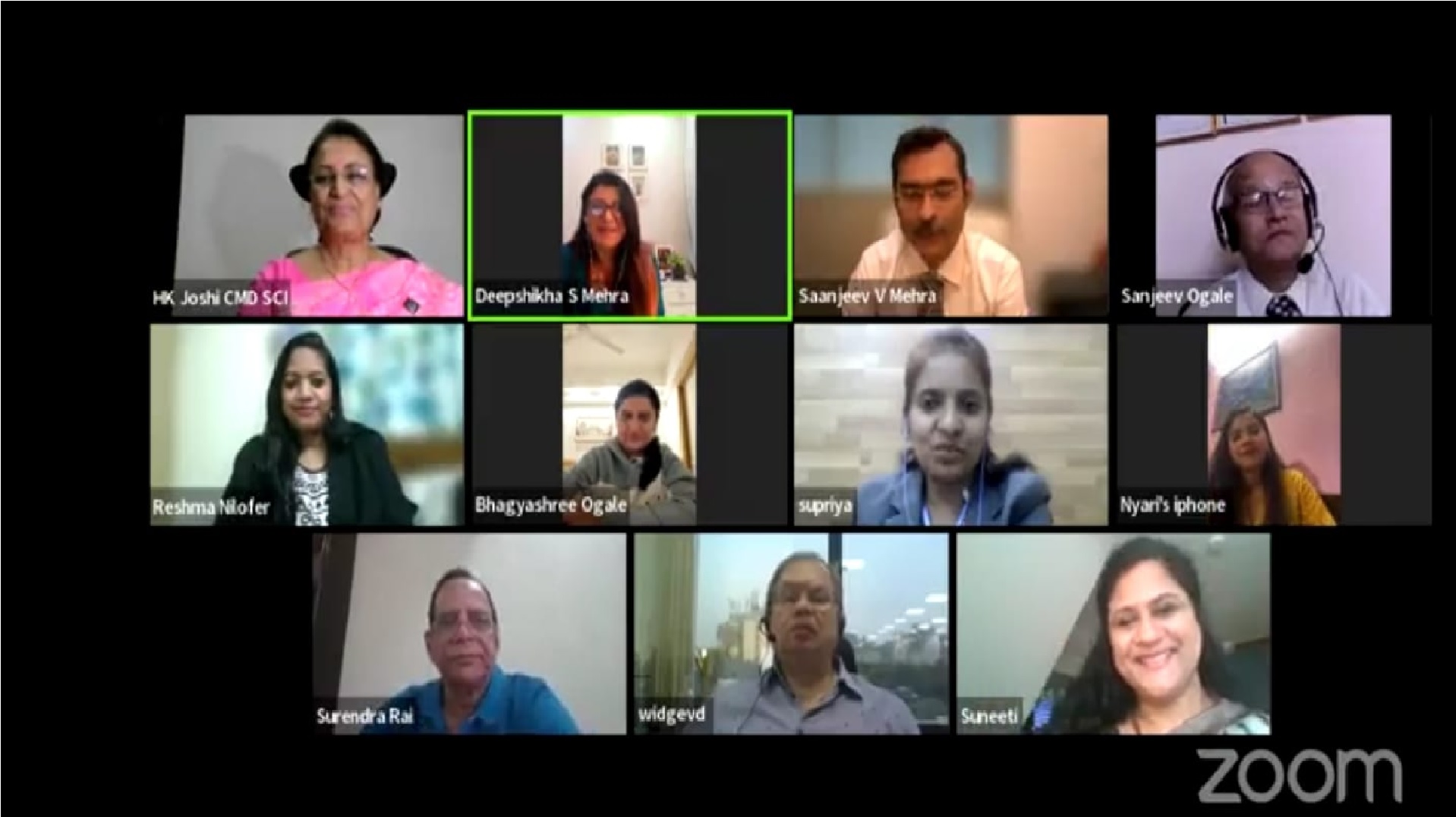 This webinar was conducted virtually by The Amazeng Nautical Association in collaboration with The Paradigm Shift.

Mr. Sanjeev Ogale started the webinar off with a warm welcome, introducing us to the Amazeng Nautical Association (ANA) which was newly formed in September 2021 for the sole purpose of setting into motion the ideas, actions & activities vital for the development & welfare of the Marine Engineering fraternity. Aiming to enable, ANA strives to create opportunities for its members by providing a forum for Marine Engineers to engage in discussions of all questions affecting them directly or indirectly and also to congregate and facilitate the interchange of knowledge and information regarding shipbuilding and allied industries.

Equivalently, The Paradigm Shift.co is a growing community of thinkers, learners & doers who are, quite simply put: shifting paradigms and making changes - be it within their personal lives or as a contribution to society as a whole. The Paradigm Shift.Co consciously aligns with individuals and organizations that share a common purpose. A raison d'être.

This was The Paradigms Shift’s  107Th episode as they spoke to the incredible guests – all women who were brilliantly in their respective careers at Sea.

Mrs. Deepshika Mehra, founder of The Paradigm Shift took over the webinar, as she welcomed the guest of honor – Mrs. HK Joshi, the first lady Chairman & Managing Director of the shipping corporation of India. Mrs. HK Joshi has received various awards - ‘Sailor Today Sea Shore Awards 2019’ under the category of "Woman of Substance".

“The Most Influential CFOs of India Award” from Chartered Institute of Management Accounts, UK for consecutive two years. 2015 and 2016. And many more.

Mrs. HK Joshi was then asked what her source of inspiration is, that kept her motivated from the start of her career to when she reached the pinnacle of success & leadership. To which she replied, “Inspiration cannot be consistent throughout your entire journey. Inspiration keeps changing with age. Inspiration is related to a situation or circumstance. As one keeps evolving, his/her inspiration should also keep evolving. Static inspiration may lead you to have a static progress.”

After the opening address by Mrs. HK Joshi, the session then moved on to Ms. Suneeti Bala, first lady chief engineer and Extra First-Class engineer, she is Ex-Marine/Class Surveyor & Auditor. Ex-DMET, she started her sailing career at Chevron shipping and grew up to become the first Indian lady sailing chief engineer on board MT SCI Albert Ekka.  She is also the 1st lady Marine Field Surveyor of India. She is Co- founder of International women seafarers Foundation and have passion to make maritime industry, a gender-neutral industry. Currently also work as quality Manager with Maersk shipping company. Ms. Suneeti Bala was quite determined to do something different. During those times, it was just announced that Women could also be Pilots, but she couldn’t qualify due to her height. She appeared for Dmet Entrance tests, which she cleared. Till she reached the campus, she didn’t realize that she was the only girl!

Ms. Suneeti Bala is also the Co-Founder of International Women Seafarers Foundation, IWSF works for the benefit of the women seafaring community around the world to bring about gender equality in maritime profession. They currently have over 300 women seafarer members from India, Bangladesh, Turkey, and Oman and are expanding with each passing day. IWSF members strive every day to support all ladies who have chosen this challenging profession.

Reshma Nilofer Visalakshi, The first lady Pilot, at Syama Prasad Mookerjee Port (Formerly Kolkata Port Trust) .Been recognized with a 'Nari Shakti Puraskar', 2019 by The Hon'ble President of India (the highest civilian honor for women in India) She is Promoter and advocate of Gender diversity, inclusion and sensitivity in the Maritime Industry. Reshma has been working as an independent pilot since 2018. A maritime pilot is a mariner who maneuvers ships through dangerous or congested waters, such as harbors or river mouths. In layman terms as she put it “valet parking people but for ships “.

She started educating people and got them to agree with her on the regulations and compliance and hence managed to bring down the number of ships that do not comply completely from 60% to 56%. Which is a remarkable change for just 1 person to do. She is a Crusader for improved pilot ladder safety and compliance in the country.

Nyari Nain, a marine engineer, currently working as the Fleet Superintendent with Maersk.  She is a TEDx speaker. She was also featured in the Friday magazine, Dubai and awarded with Young Seafarer achievement award by the NMDCC, DG shipping, Govt of India. She is an author, Anchor My Heart, her first book. In India, the book was released by Hon Nitin Gadkari, Shipping Minister and was recently unveiled at the Sharjah International Book Fair.

Moving on to Ms Supriya Doke. She started her career with the shipping corporation of India in year 2010.  She joined her first vessel as fifth engineer in year 2011 and was promoted to the rank of chief engineer in year 2020. She was also the chief engineer on the all-woman ship "MT SWARNA KRISHNA " owned by SCI. It was an experience of complete responsibility and excitement for her. The number of women that have joined the maritime industry has tremendously increased since 2010 which led to the all women ship “Mt Swarna Krishna “. She enjoyed the privilege of being on the “Mt Swarna Krishna”.

Ms. Bhagyashree Ogale is currently sailing as Additional First Engineer in Teekay Tankers. She had joined the Maritime Industry so she could help her Father’s Business which is also based on the maritime industry and was determined that she would not sail. In her third year, she was presented an opportunity to sail and with her father’s encouragement she decided to give sailing a try and completely fell in love with it. She has Passed B.S in Marine Engineering from the Tolani Maritime Institute (Affiliated to BITS Pilani) with First Class in 2012. She was Awarded by DG shipping for being the youngest lady officer to clear MEO class 4 in 2014 (India)

The link to the webinar is as follows - https://fb.watch/b7dxj0OwlK/