The newest dual-fuel ferries of FSUE 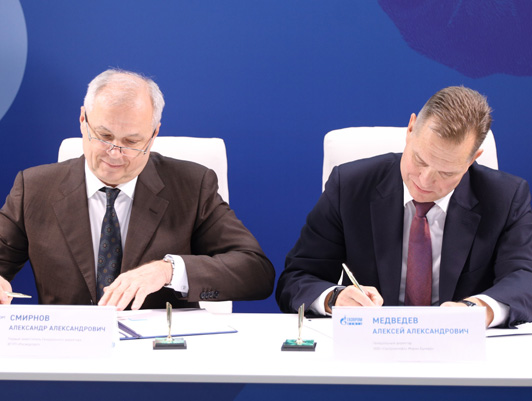 On September 15, 2022, a solemn ceremony was held in St. Petersburg on the sidelines of the St. Petersburg International Gas Forum to sign an agreement between FSUE “Rosmorport” and Gazprom Neft's bunker operator Gazpromneft Marine Bunker for the supply of safe, environmentally friendly fuel for bunkering the country's first eco-ferries Marshal Rokossovsky and General Chernyakhovsky.

Alexander Smirnov noted that the introduction of environmentally friendly technologies in the implementation of fleet construction and operation projects is one of the priority activities of FSUE “Rosmorport”.

“The search and development of solutions to limit emissions of harmful substances into the atmosphere are of particular importance considering the growing volume of sea traffic on the strategically important line for the country that connects the western Russian exclave with the main territory of the country.

The use of LNG at the new Marshal Rokossovsky and General Chernyakhovsky eco-ferries is our joint contribution to the preservation and protection of the environment. It is worth noting that there are no such “green” ferries – with the possibility of working on LNG – in Russia today,” Alexander Smirnov added.

Bunkering with liquefied natural gas of the FSUE “Rosmorport” newest automobile and railway ferries, designed for stable transport communication of the Kaliningrad Region with the rest of Russia, will be carried out by the first Russian bunkering tanker named Dmitry Mendeleev in the autumn of this year.

“The Baltic Sea is included in a special navigation area with high environmental standards for motor fuel. Liquefied natural gas, due to its environmental characteristics, primarily to minimum sulfur content, has a high potential for use on passenger and cargo vessels. In the near future, together with our partners, we will be ready to start the first commercial LNG refueling in the Baltic Sea using the high-tech bunkering vessel Dmitry Mendeleev,” noted Alexey Medvedev, General Director of Gazpromneft Marine Bunker.

In March 2022, the ferry fleet of the Ust-Luga – Baltiysk line was replenished with the newest innovative vessel Marshal Rokossovsky, built by order and at the expense of own funds of FSUE “Rosmorport”. At the end of September, another “green” ferry, the General Chernyakhovsky, is scheduled to enter the line. Both vessels are designed  with regard to the highest standards of compliance with the environmental safety of overseas transportation.

The parties confirmed their intentions to continue cooperation in the field of LNG supplies and the development of solutions to improve the environmental friendliness of the transport infrastructure of the North-Western region of Russia.