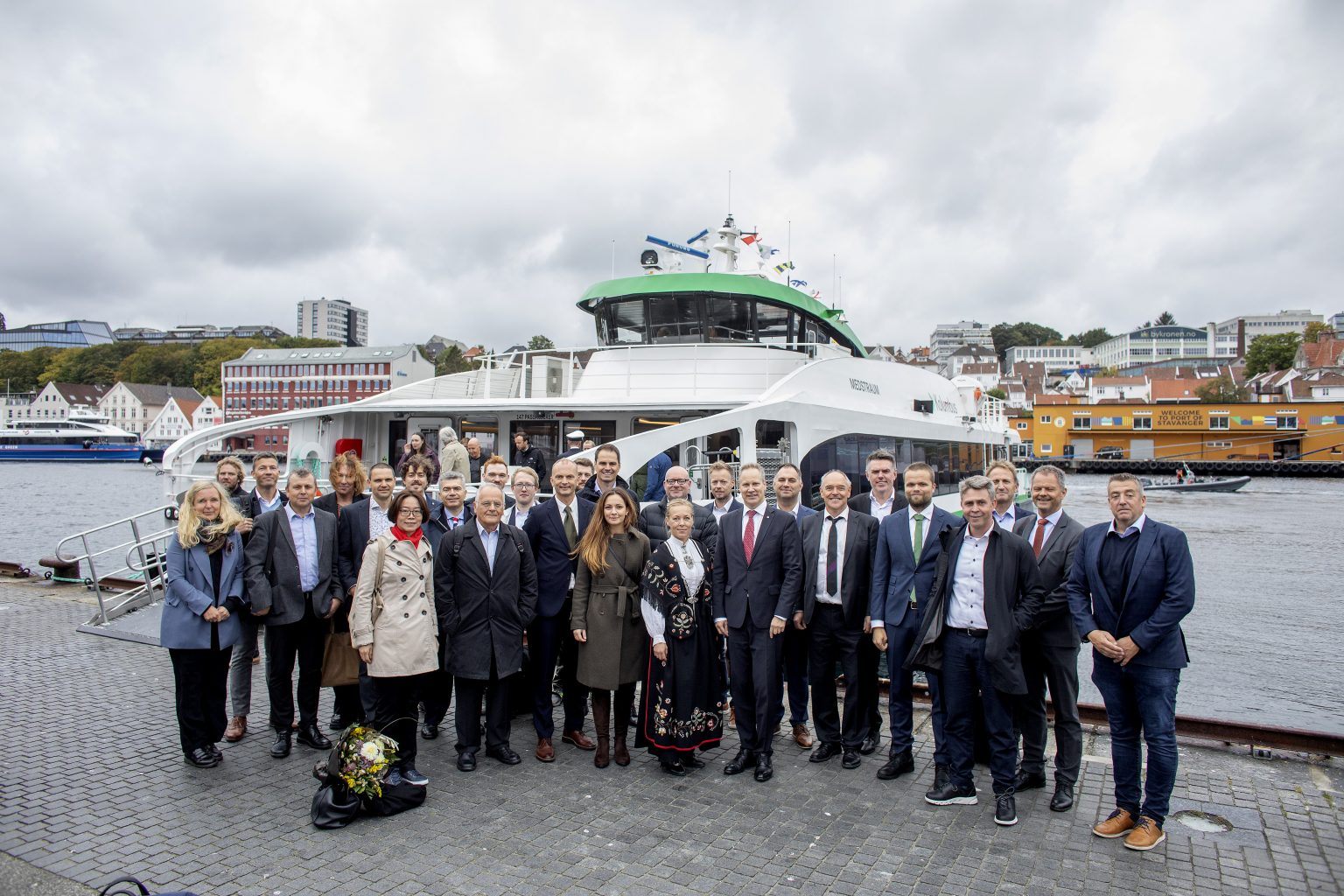 The TrAM project vessel Medstraum marks the start of a new era of emission-free sailing.

– Medstraum is a shining example of what we can achieve with good cooperation and innovation, said Norwegian Minister of Transport, Jon-Ivar Nygård.

The Norwegian Minister of Transport opened the naming ceremony of the TrAM project vessel Medstraum´s in Stavanger, Thursday.

Project partners, distinguished guests from the EU and key players from the global maritime sector, were all invited to take part in the ceremony.

­– I would like to pay great tribute to Maritime CleanTech as the prime mover in a Norwegian competence environment, which is a leader in the green maritime industry. I would also like to say a big thank you to the mobility company Kolumbus, which has ventured out on this journey and set the course towards zero-emissions for fast moving passenger vessels, Nygård said.

In his opening speech, the Minister also pointed out the importance of Rogaland County’s involvement and support of the innovative project.

After a high-level seminar, the participants moved to Skagenkaien. Here the Rogaland County Mayor Marianne Chesak did the honors of naming the vessel.

– I am very proud to be the godmother of Medstraum, and I will remember this day for the rest of my life, Chesak said.

She preceded to highlight the project as the marking of a new and greener future for shipping.

In a symposium earlier this day, the County Mayor and Godmother addressed international guests from The European Union, Canada, and Scotland. The Minister of Transport was also present, along with both local and regional politicians, representatives from the Norwegian Confederation of Trade Unions (LO), The Norwegian Confederation of Business (NHO), partners and other excited participants.

After her naming ceremony, Medstraum did several trial trips with the public.

When starting her route for Kolumbus, the fast ferry will transport passengers between Stavanger and the city islands. Replacing the traditional fossil fueled fast ferry on this route, Medstraum will reduce CO2-emissions equivalent to 30 busses each year.

– Medstraum is already stirring great interest internationally. The maritime industry across the world is now looking at what we achieve in our maritime cluster. This could really be the start of a new adventure for our industry.  Not only have the project partners developed and demonstrated a new and emission-free propulsion system that can maintain higher speeds than before, but we have also adopted completely new modular design- and construction methods that will revolutionise the way we build boats in the future, says Håvard Tvedte, Head of Communications and Public Affairs of Maritime CleanTech, the cluster organisation who initiated the EU-funded TrAM-project.

Whilst the vessel was put on the sea earlier this year, the project has been long in the making.

The partner discussions started back in 2016, and two years later 13 European partners were awarded funding from the EU H2020 program. The vessel construction began last spring, at Fjellstrand Yard in Hardanger. At 31 meters long and nine meters wide, Medstraum can carry approximately 150 passengers. Fitted with two electrical engines and a battery with 1,5 MWh capacity she is designed for a service speed of 23 knots. Made for sustainable, soundless, and smooth sailing, the vessel was given the very suitable Norwegian name Medstraum.

This project has received funding from the European Union’s Horizon 2020 research and innovation programme under grant agreement No 769303.