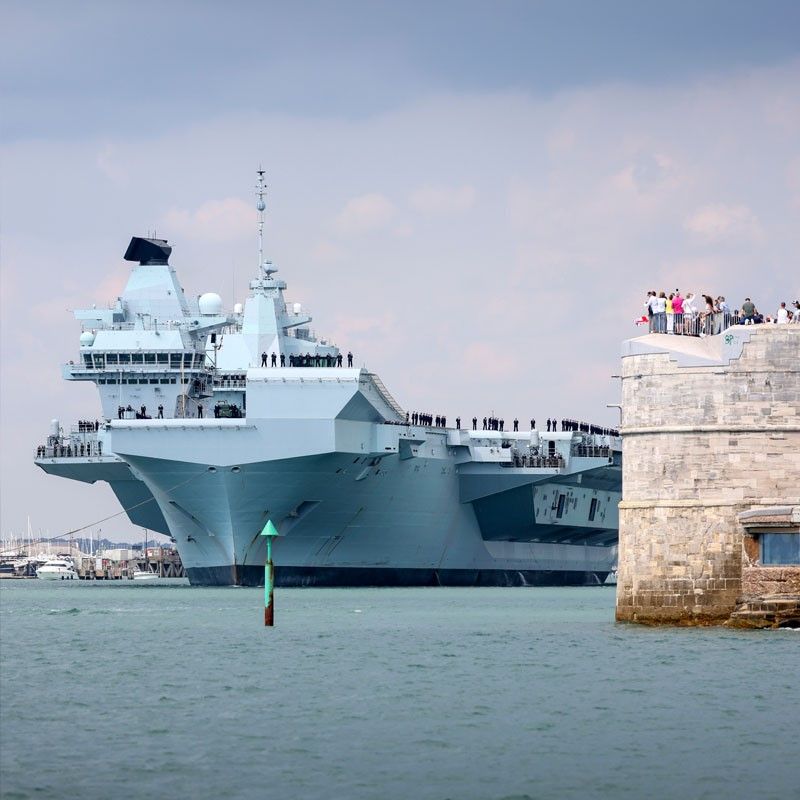 Britain’s biggest warship has sailed from Portsmouth on a landmark mission to shape the future of stealth jet and drone operations off the coast of North America and in the Caribbean.

HMS Prince of Wales will cross the Atlantic with her task group, ready to push the boundaries of uncrewed technology and the tactics used by the UK’s two new Queen Elizabeth-class carriers.

Along with notable port stops in New York, Halifax in Canada, and the Caribbean, the next three months will see the Prince of Wales task group work closely with US allies, operating F-35B jets and uncrewed systems which will define Royal Navy aviation of the future.

With fleet flagship HMS Queen Elizabeth also set to deploy to the Mediterranean and Baltic this autumn at the heart of a potent Royal Navy task group, it will mean both UK aircraft carriers will be operating F-35B jets thousands of miles apart.

Commanding Officer, Captain Richard Hewitt, said: “Taking the HMS Prince of Wales task group across the Atlantic for the rest of this year will not only push the boundaries of UK carrier operations, but will reinforce our close working relationship with our closest Ally.

“From operating the F35 Lightnings and drones to hosting the Atlantic Future Forum, none of this would be possible without the efforts of the amazing sailors on board, many of which are on their first deployment with the Royal Navy.”

The 65,000-tonne warship deploys initially alongside frigate HMS Richmond, tanker RFA Tideforce and an air group of helicopters and drones, before F-35B stealth fighters join the deployment once the ship arrives in North America for the Westlant 22 deployment.

“I’m really looking forward to seeing the United States, especially New York from the flight deck of an aircraft carrier. Getting the jets on board will definitely be a highlight, and operating on the deck with them,” said 23-year-old Able Seaman Owen Cooper, an aircraft handler. Nineteen-year-old Able Seaman Joe Spence from Portsmouth is on his first deployment and is really looking forward to working with the F-35 and Banshee drones – pilotless mini jets used to train crew in dealing with aerial threats – from the carrier’s hi-tech operations room.

“It will be a big change working with the new technology. I’m also looking forward to seeing New York, I’ve heard it’s an amazing experience!”

Frigate HMS Richmond left Plymouth today and will remain with the carrier for the bulk of the autumn as they conduct collective training, and there will also be the chance to enjoy some high-profile port visits Stateside.

“This is a fantastic opportunity for the Royal Navy to strengthen our special relationship with the USA and demonstrate our ability to operate with a close ally,” said Commander Christopher L’Amie, Richmond’s Commanding Officer.

“The ship’s company, many of whom have not visited the USA before, is looking forward to visiting a number of East Coast ports.”

HMS Prince of Wales will remain at high-readiness throughout her mission to America in her role as NATO’s command ship, which sees her head up the naval element of the alliance’s response force that is capable of being deployed quickly anywhere in the world to react to crises.

The deployment will build on the close collaboration between the US Navy, Marine Corps and Royal Navy, from previous Westlant deployments to American participation throughout last year’s maiden deployment of the HMS Queen Elizabeth carrier strike group.

The importance of Anglo-American naval cooperation was underlined only last week during talks in London between the First Sea Lord Admiral Sir Ben Key and his US Navy counterpart, Chief of Navy Operations, Admiral Mike Gilday.

While in New York, HMS Prince of Wales will host the Atlantic Future Forum – a conference that brings together the brightest minds and most influential thinkers from defence and beyond to strengthen UK and US bonds.

They will discuss the ever-changing picture of international security and the technologies which will define the next decade and beyond.

This is a fantastic opportunity for the Royal Navy to strengthen our special relationship with the USA and demonstrate our ability to operate with a close ally,  Commander Christopher L’Amie, HMS Richmond’s Commanding Officer