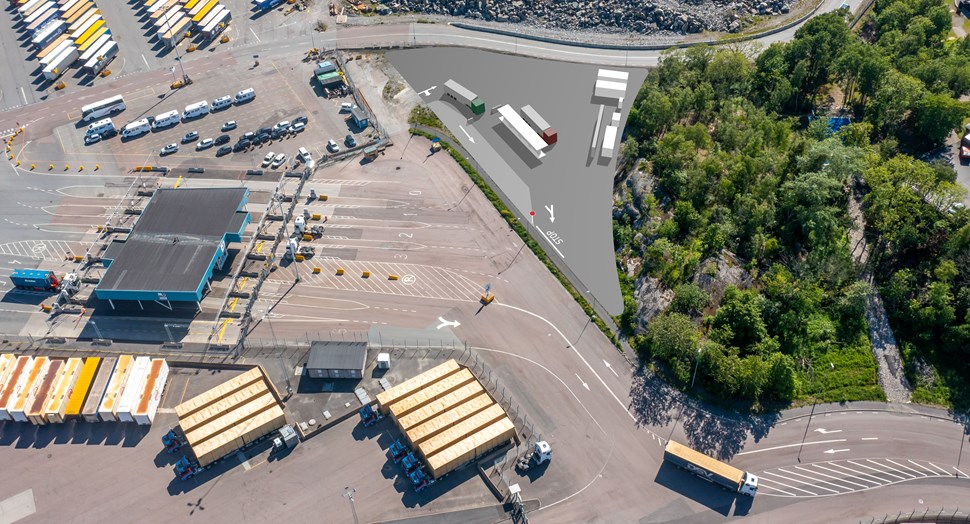 A hydrogen filling station for heavy vehicles is being planned at the Port of Gothenburg. The filling station will be right next to the entrance to the Gothenburg RoRo Terminal – one of the places in Sweden most intensively used by trucks. The station will supply green hydrogen only and is set to be completed in September 2023.

“It’s a much-requested addition to the port, one that’s also fully in line with our strategy to create conditions for accelerating the transport industry’s transition to fossil-free,” says Viktor Allgurén, Head of Innovation at the Gothenburg Port Authority.

The station will be located just by Gate 6 – the entrance to Gothenburg RoRo Terminal. The short approach road that leads to this gate is one of the most heavily trafficked roads in Sweden, used by about 350,000 trucks every year. As Stena Line is expected to relocate its current Germany and Denmark terminals to Arendal, just to the west of the ro-ro terminal in the coming years, traffic will increase additionally in the immediate vicinity.

“Building up storage of renewable energy in hydrogen is an important piece of the jigsaw in achieving the climate goals. As the Port of Gothenburg is a strategically important hub for heavy goods transport operations in Sweden, building a hydrogen filling station next to the port enables us to work together with the port and its various stakeholders to make a strong contribution to the fossil-free transport operations of the future,” says Martina Wettin, co-founder and Business Development Director at Nilsson Energy.

A generous portion of humility will be required ahead of the task of locating a hydrogen filling station at the heart of the biggest freight hub in the Nordic region. Any disruption could have knock-on effects throughout the whole logistics system.

“A hydrogen filling station contains large volumes of pressurised energy, so we are facing a risk management process and, not least, a permit process, which we must face with great humility. But we feel very reassured about progressing this project with Nilsson Energy, a company with extensive experience in this field and the most highly respected actor on the Swedish hydrogen market,” says Viktor Allgurén.

The neighbouring terminals also see opportunities with the proposed filling station. For customers using the terminals, and for their own loading and unloading operations.

“The location is ideal for truck customers, and also gives us as the terminal operator an opportunity to use hydrogen to power our work machines in the future. We’re a close neighbour of the new hydrogen filling station, so issues of safety and risk are naturally important,” says Maria Franksen, CEO of Gothenburg RoRo Terminal.

“The most important thing about having two stations is the peace of mind, knowing that it will be possible to have an uninterrupted opportunity to fill up with hydrogen at the port, even if one station is closed for maintenance or the like. That creates a robustness in the infrastructure that is a decisive factor for haulage companies that are considering converting parts of their vehicle fleets to run on fuel cell technology.”

The initiative to build a network of hydrogen filling stations in the port is part of the Tranzero Initiative – an initiative to reduce emissions initiated by the Gothenburg Port Authority, Volvo Group, Scania and Stena Line. The goal is to accelerate the transport sector’s transition to fossil-free alternatives such as green hydrogen. The sights are set on both road and marine transport operations.

Facts: Hydrogen filling station by gate 6 at the Port of Gothenburg
Where: At the Port of Gothenburg by gate 6, just next to Gothenburg RoRo Terminal and Arken Intermodal Terminal.
When: Completed before September 2023
How: The station will deliver green hydrogen generated by solar, wind or hydro power.
Hydrogen capacity: 1,500 kg, approx. 35 trucks/day
How many vehicles can fill up simultaneously: 2
Investment cost: SEK 35 million. The project is being financed in full by the Swedish Energy Agency.