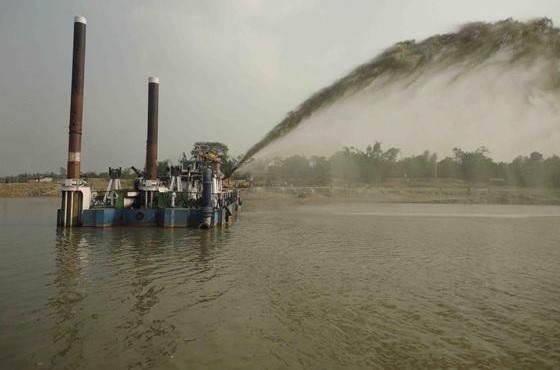 Kolkata, In a bid to encourage private shippers to use inland waterways via India-Bangladesh protocol route, the board of IWAI has decided to come out with a contract worth Rs 200 crore for dredging and maintenance of fairway of rivers up to the Indian side in the north-east region, an official said.

The Inland Waterways Authority of India seeks to maintain a minimum draft of 2.5 metres for smooth sailing of barges, he said.

â€œThe inland waterways authority has agreed to spend Rs 200 crore for dredging and maintenance of fairway for three years in some pockets such as Pandu and Dhubri in the north-east region, where there are some bottlenecks for sailing of barges.

â€œThis support is not part of a grant to Bangladesh for dredging in the India-Bangladesh protocol route,â€ Syama Prasad Mookherjee Port, Kolkata chairman and a part-time member of IWAI Vinit Kumar told PTI.

He also said the use of the India-Bangladesh protocol route is very successful for cargo movement to the northeast region of India and also to the neighbouring country.

â€œNow at any point in time, 100 barges are on our river channel. There are some bottlenecks in the NE (northeast) side which will be sorted out with the proposed dredging at Rs 200 crore,â€ Kumar said.

Kolkata port is also planning to deploy a dedicated floating crane for use in transloading activities for container cargo at West Bengalâ€™s Sagar and Sandhead.

Kumar said the transloading activities will also help the movement of imported goods to the northeastern states.

â€œSMP, Kolkata is set to float a tender for a dedicated floating crane for container cargo. We already have two floating cranes that are used in dry bulk cargo transloading activities,â€ he said.

The volume of cargo handling is expected to reach 2.5 million tonne this fiscal, he said.

With the operationalisation of the third floating crane, the total cargo handling will surpass the 3.5 million tonne mark, the official added. PTI BSM BDC BDC

Article by: Press Trust of India.Â