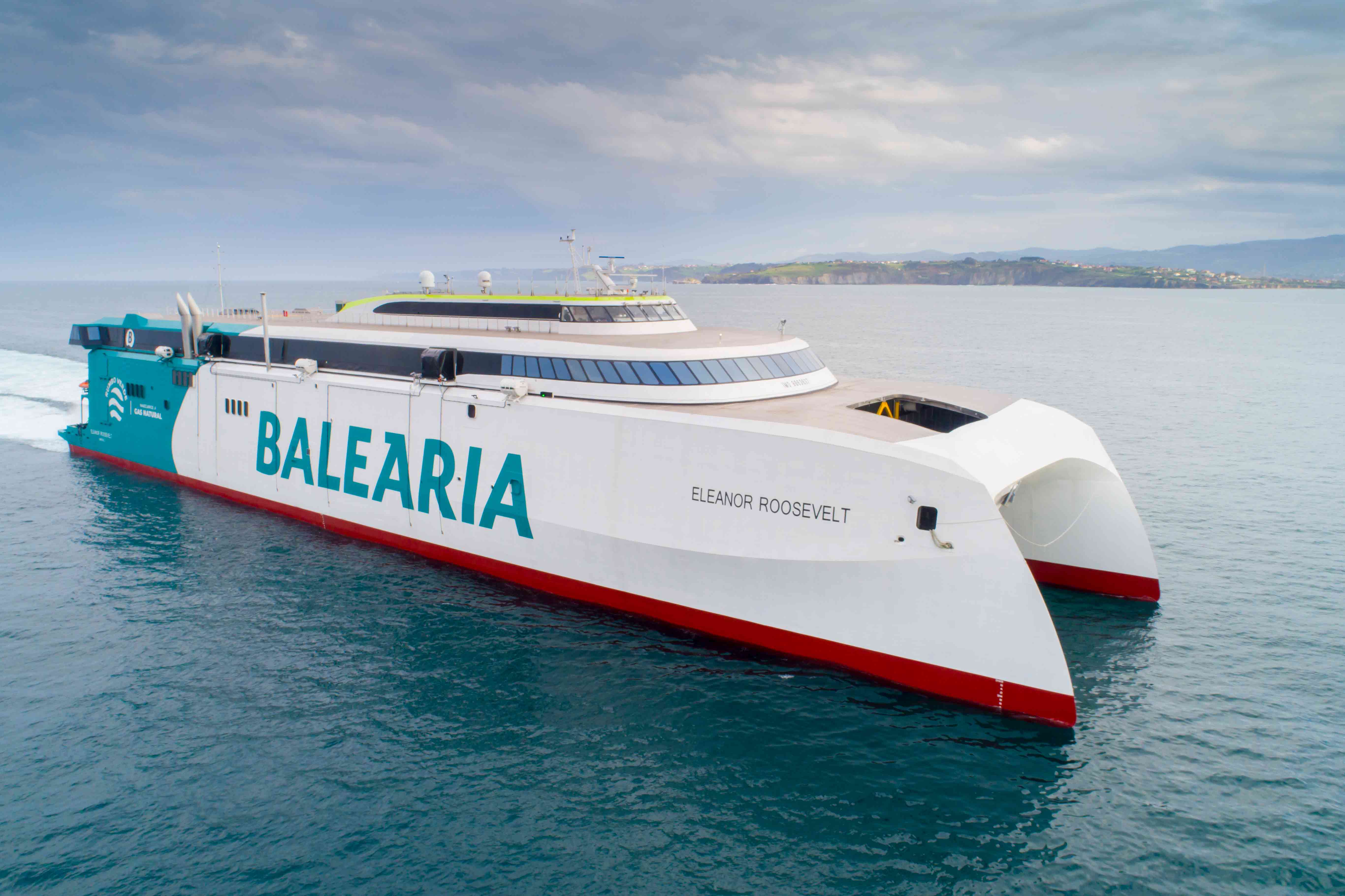 Baleària renews its trust in Armon with the construction of a second improved unit of the innovative 'fast ferry Eleanor Roosevelt'.

Baleària has begun the construction of a second fast passenger and cargo ferry with dual natural gas engines at the Armon shipyard in Gijón as a result of the shipping company and its customers' satisfaction with the navigation and comfort offered by its twin, the Eleanor , from 2021 Roosevelt . The shipping company will baptize the ship with the name of the pioneering biochemist Margarita Salas and expects it to start operating in 2024.

The president of Baleària, Adolfo Utor , explained that the ship "will combine the most competitive features of the Eleanor Roosevelt with a series of novelties in its design and engineering to elevate the customer experience ". Likewise, he has pointed out that " the construction of this second unit responds to the exceptional results of the Eleanor Roosevelt and the commitment to this innovative and eco-efficient prototype" .

This new ship will have the same characteristics as its twin Eleanor Roosevelt : 123 meters long, 28 meters wide and a capacity to transport 1,200 passengers and 400 vehicles. As a novelty, the Margarita Salas will have a second deck with a seating area in the bow and will double the surface area of â€‹â€‹the aft terrace with a bar service outside.

On a technical level, the shipping company will increase the power of the Margarita Salas by 10% compared to its counterpart, with the installation of four dual 9,600 kW Wärtsilä natural gas engines, which will allow it to reach a service speed of 35 knots. Likewise, she will have a propulsion system made up of four waterjets and will have two azimuth propellers at the bow to improve maneuverability when docking in port.

Prepared for the energies of the future

This ship will be Baleària's tenth with dual natural gas engines, a versatile technology that can also consume 100% biomethane, as well as green hydrogen mixtures of up to 25%, renewable gases that are neutral in CO2 emissions and are considered the most from the future.

For a year now, Baleària has been forced to reduce the use of this fuel due to the skyrocketing growth in its price, although it considers it a transitional energy, since it is the cleanest and most mature that currently exists with the horizon of decarbonisation by 2050.

Margarita Salas , a new tribute to a pioneering woman in science

The maritime company has opted to baptize the new fast ferry with the name of Margarita Salas , in tribute and in memory of one of the most important scientists of the 20th century, and one of the most notable female references. Margarita Salas became a pioneer woman in the field of biochemistry thanks to her drive in the development of molecular biology in Spain. Salas dedicated his entire life to research, worked for three years with Nobel laureate Severo Ochoa in biochemistry at New York University and on his return to Spain founded the first molecular genetics research group in the country at the Higher Research Council Science (CSIC) in Madrid.

Innovation and comfort at the customer's service

The fast ferry will have the latest technological innovations: passengers will access their accommodations by means of a QR code, they will enjoy Internet service and free use of WhatsApp during the voyage and they will have an on-demand digital entertainment platform during the voyage, as well as such as a video surveillance system for pets through webcams.

In the interior design, the amplitude of the spaces and the separation between seats will continue to be prioritized, even more than those offered by the Eleanor Roosevelt rooms . The stabilization system will also be maintained, which will considerably reduce movement and allow greater comfort on board. Vibrations and noise will be minimized thanks to an elastically floating superstructure and the installation of high-tech insulation. Finally, the ship will also have escalators and an elevator to the upper deck.

Baleària will install measurement equipment in the Margarita Salas that will allow real fuel consumption to be monitored or engine efficiency to be calculated, among other functions. The installation of sensors will also provide real-time information to be able to navigate efficiently, as well as adjust the speed and course to increase comfort according to the state of the sea. This is the eighth ship of the shipping company to have this monitoring system, and which is part of the Baleària Control Tower project, which uses big data to make agile and efficient decisions in the areas of safety, preventive maintenance, efficiency commercial and emissions control.