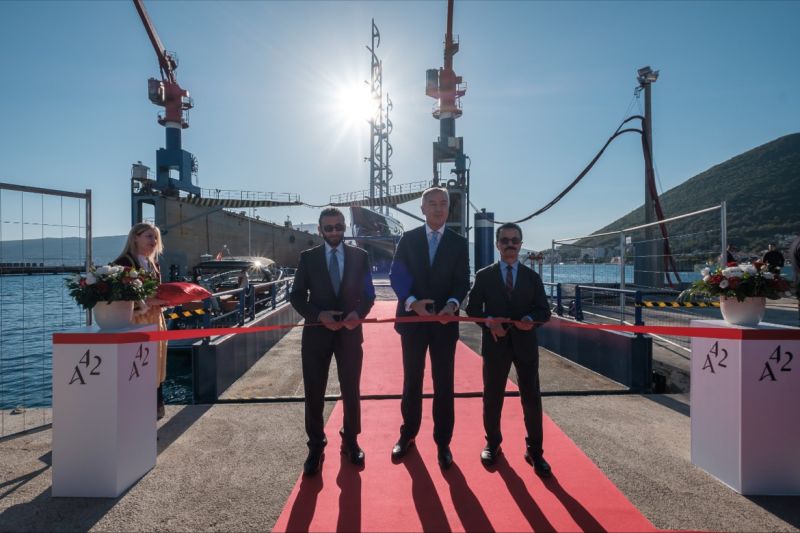 The announcement marks the beginning of significantly enhanced operations at the facility in Bijela, Herceg Novi, Montenegro. The world's largest sailing yacht, Black Pearl, became the first boat to dock in Adriatic42's superyacht yard earlier this month for its ongoing refit.

The Government of Montenegro granted a 30-year concession for the former Bijela shipyard which is located in the one of the safest natural harbours in the world, under Adriatic42, the shipyard is undergoing a comprehensive redesign, transforming it into a premium superyacht refit and maintenance facility.

Adriatic42 already employs approximately 100 staff, who bring a long tradition of maritime expertise to the yard. The former Bijela shipyard, nearly 100 years old, was the largest ship repair yard in the Southern Adriatic. The new joint venture will extend this maritime heritage. Its location in one of the most sought-after seas in the world, makes it a haven for the global luxury yachting community.

His Excellency President of Montenegro, Milo ÄÂukanoviÄ‡, said: "From this day onwards, the launch of Adriatic42 puts Montenegro at the centre of the world’s nautical tourism industry. Adriatic42’s comprehensive facility and service offerings from quality repairs and fabrication, as well as moorings, will allow yacht owners to enjoy Montenegro’s world-class marinas all year round.

"We now have an international standard marina and refurbishment facility in the country, which further positions our nation as a prime tourism destination in Europe and the Mediterranean. Furthermore, Adriatic42 will be a beacon for economic opportunity in the country culminating in hundreds of jobs thanks to the shipyard, as well as a conduit for specialised small and medium sized businesses who can support the yachting industry.

"Adriatic42 represents a massive opportunity for our country, now and in the future."

Managing Director of ICD, His Excellency Mohammed Al Shaibani, said: "The Investment Corporation of Dubai is delighted that the joint venture between its operating business in Montenegro, PM Holdings LLC, and our expert marine engineering partner, Drydocks World Dubai, is being realized through the opening of Adriatic42’s specialist superyacht shipyard. Together we’ve shared a long-held ambition to re-activate Montenegro’s former Bijela shipyard in Kotor Bay, and Adriatic42’s new refit and repair facility, with the extraordinary superyacht marina village of Porto Montenegro as its backdrop, will create a unique and unrivalled year-round yachting hub in the Mediterranean. This is just the beginning for Adriatic42’s superyacht services, and we look forward to the employment opportunities and prosperity which they will bring to Montenegro."

Chairman of Adriatic42, Captain Rado AntoloviÄ‡, said: "The opening of this unique facility for the refit and maintenance of mega yachts, marks the beginning of a new era of sustainable and modern shipbuilding globally. It is also a great boon for the maritime and yachting sectors in Montenegro, with more than €40 million invested in the project to date, including for the acquisition of the state-of-the-art infrastructure and investments in sustainable technologies."

Captain Antolovic also outlined the importance of environmental protection. Preserving the natural environment is a key priority for the new facility which is located in the unique Boka Kotorska. Adriatic42's sustainable approach, which includes the highest environmental and safety standards to prevent environmental pollution, is supported by new and modern equipment that allows the facility to maintain an energy-efficient way of doing business and the intelligent use of alternative energy sources.