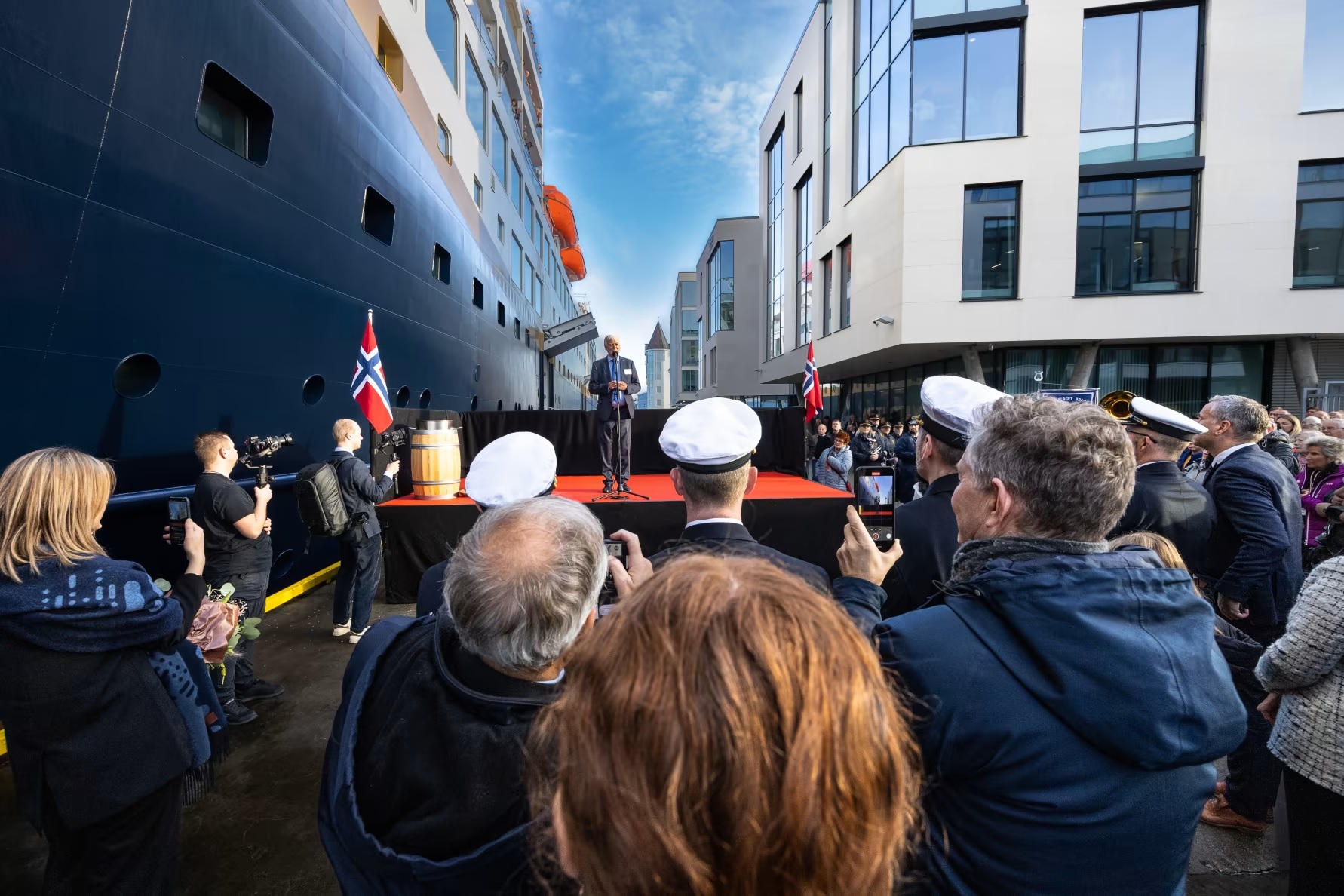 On Monday, the coastal liner Havila Castor was christened by godmother Aurora Sævik at Skansekaia in Ålesund.

After half a year in operation along the Norwegian coast, Havila Castor was officially christened in Ålesund on Monday. The ship's godmother is Aurora Sævik, granddaughter of chairman and main shareholder Per Sævik.

"I was incredibly proud and happy when grandfather asked if I wanted to be godmother to Havila Castor", says Aurora Sævik.

"We, the grandchildren, were allowed to help choose the names of the coastal liners, but I had never imagined standing here today. This has been a memory for life".

Havila Castor is named after Castor, a star in the constellation Gemini. Pollux, after which Havila Kystruten's last ship is named, is the second star in the Twins, stars which are historically used for navigation at sea and which take ships and crew safely home to port.

"We would have liked to have the twin ship Havila Pollux here today as well, but she will have her well-deserved christening in the course of next year", says chairman Per Sævik.

"The last week has been important for us in Havila Kystruten, when we have now finally christened our two ships in operation. Now we are looking ahead, and are looking forward to Havila Polaris and Havila Pollux starting to sail along the coast so that we can deliver on our social mission".

At the beginning of June, Havila Castor sailed into the Geirangerfjord for the first time. That voyage was made on pure battery power, emission-free and silent. The event took place four years before the authorities' requirement for emission-free shipping in the world heritage fjords in Norway.

"When the Storting decided this in 2018, many people said that 2026 was too early and completely impossible. We proved by a good margin that it is possible and that puts us at the forefront of development along the Norwegian coast", says managing director Bent Martini.

"In Ålesund, many people had made the trip to witness the christening of the coastal liner".

"Ålesund is an important port along the coastal route. In winter, we dock here for several hours, and in the summer and autumn seasons it is the starting point for our sailings in the Geirangerfjord and the Hjørundfjord. That's why we think it made sense to arrange the baptism here today, and we think it's very nice that so many people wanted to share the day with us", says Martini.

"The last few weeks have been hectic for the entire organization to carry out these christening events, and I have allowed myself to be impressed by the effort our employees have put in both at sea and on land, he concludes".