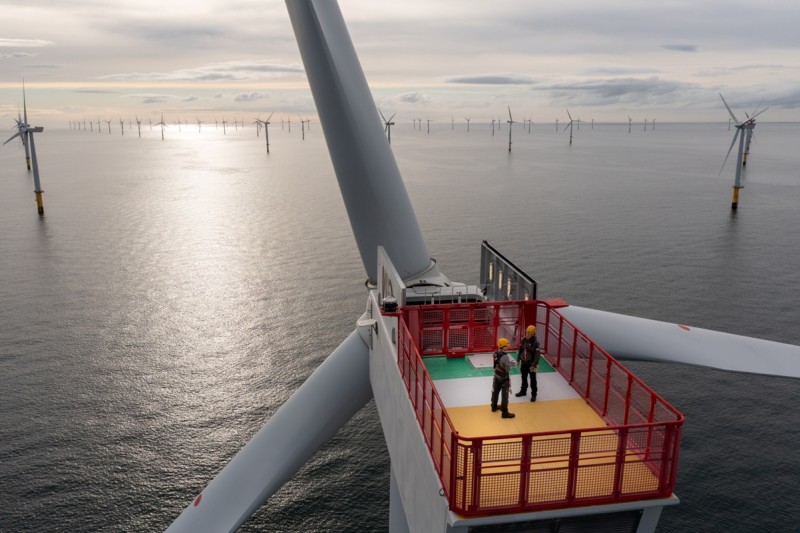 In a major milestone for the UK’s energy security and net zero commitments, The Crown Estate today announces it has signed Agreements for Lease for six offshore wind projects which could begin to generate green electricity by the end of the decade and have the potential to generate c.8GW of renewable electricity, enough for more than seven million homes.

Signing these agreements represents a significant moment in the UK’s response to climate change and energy security, and further bolsters the country’s thriving offshore wind industry, reinforcing its position as the second largest offshore wind energy generator in the world.

Three of the six projects are located off the North Wales, Cumbria and Lancashire coast, and three are located in the North Sea off the Yorkshire and Lincolnshire coast.

Following The Crown Estate’s final decision to proceed in August 2022, the agreements are the culmination of The Crown Estate’s Offshore Wind Leasing Round 4, adding further strength to the offshore wind sector’s track record in leading the UK's net zero energy transition. Round 4 follows three previous leasing rounds by The Crown Estate which, along with investment in cutting-edge data and evidence and a commitment to increasing collaboration across sectors, has paved the way for the development of a world-class offshore wind market in the UK, with The Crown Estate having now awarded rights totalling 41GW.

With agreements signed, developers can now further progress their plans for the projects which have the potential to make a major contribution to delivering sustainable, renewable energy for the UK, as well as the Government’s target of 50GW of offshore wind capacity by 2030.

“The UK’s offshore wind achievements to date are nothing short of remarkable, and this next generation of projects point to an even more exciting and dynamic future.

“They demonstrate the far-reaching value that our world-class offshore wind sector can deliver for the nation: home grown energy for all, jobs and investment for communities, revenue for the taxpayer, clean energy for the benefit of the environment and a considerate, sustainable approach which respects our rich biodiversity.

“Moving forward, working with our stakeholders to continue unlocking this value is what drives us, and we are more committed than ever to lead the way in ensuring this important benefit is realised for our environment and for the nation.”

“Today marks a significant milestone for the UK on the road to net zero, unlocking green energy potential for more than seven million homes and demonstrating to the world that the UK offshore wind industry is growing at pace to help meet the climate challenge.

“As we face up to energy, climate and biodiversity challenges, we will continue to convene the best minds and support new technologies which will help realise the potential of the seabed as a key component of the UK’s renewable energy system; a home to a thriving natural environment; and a route to energy security.

“I’d like to thank all those who have collaborated with us on this leasing round to ensure the UK continues to lead the way in rebalancing energy provision away from fossil fuels for the benefit of present and future generations.”

"Britain's position as the European leader in offshore wind shows no signs of letting up. These six projects demonstrate how areas across the UK can contribute to ensuring Britain meets its world-leading ambition of deploying up to 50GW of offshore wind by 2030.

"Offshore wind is at the heart of our goal to secure clean, affordable and resilient energy supply for all in the UK, while bringing major business, investment and job opportunities along with it.”

“Today’s announcement is an important step forward - not just to deliver sustainable future sources of energy but also for the Welsh economy and communities.

“We are determined to make the most of opportunities afforded by the urgent need to scale up renewable energy generation to transition away from fossil fuels and believe offshore wind will play a major role in the future energy system in Wales.

“We have a high level of ambition for the sector, and we are looking to maximise the employment opportunities across the supply chain and continue to work with The Crown Estate to deliver on our ambitions”.

A pioneering approach to environmental habitats

The Crown Estate will now lead a pioneering programme of work to oversee the development of strategic environmental compensation plans for two protected sites, ensuring that the health of the natural marine environment remains at the centre of development plans.

This is in response to a rigorous assessment of the potential impacts of Offshore Leasing Round 4 on the most valuable environmental habitats in the UK (the Offshore Wind Leasing Round 4 plan-level Habitats Regulations Assessment), and a commitment to ensure that environmental compensatory measures are put in place to offset the predicted impacts on two protected sites (the Dogger Bank Special Area of Conservation and the Flamborough and Filey Coast Special Protection Area).

The Crown Estate will now establish a Steering Group for each of the protected sites, comprising government and statutory nature conservation bodies and the relevant project developers, which will drive the development of the detailed plans to ensure appropriate delivery of the commitments made by The Crown Estate through its plan-level HRA.

From the first leasing round in 2001, The Crown Estate has supported the development of a world-class offshore wind market, which has grown to become the largest source of renewable electricity in the UK, currently able to power approximately 41% of UK homes.

This continued momentum along with today’s announcement, has led to The Crown Estate awarding rights for 41GW of offshore wind capacity, almost 12GW of which is already operational.

Recognising the urgent need for green, home-grown energy provision, The Crown Estate is committed to unlocking opportunities for emerging and new technologies which can help shape a UK energy system fit for the future, in line with government policy. Key to this is bringing together a wide range of partners, experts, insights, data and evidence to build a holistic view of the seabed to inform how it can sustain a wide variety of industries and biodiversity for the long term. This includes:

Unlocking value for the nation

The seabed is a valuable national asset and through Round 4, significant value has been secured for the benefit of the nation.

Under the Agreements for Lease, The Crown Estate receives an annual option fee from each project developer, until they are ready to enter into a lease for the seabed site. The option fee sum was determined by the project developers themselves through an open market process to ensure fair value for seabed rights was captured. Option fees will contribute toward The Crown Estate’s net revenue profit, 100% of which is paid to HM Treasury for the benefit of the nation. â€¯

The total commitment across all six projects is approximately £1bn per year, reflecting the confidence in the UK’s world leading offshore wind sector and Government’s commitment to grow the low carbon economy.

The term of the Agreement for Lease is for a maximum of ten years. Successful bidders have committed to at least three years of option payments by entering into the Agreement for Lease, and the option payments reduce as a project moves into a lease, or leases, and cease when a lease(s) for the maximum capacity/whole site is granted, at which point developers will move to paying rent.

RenewableUK's CEO Dan McGrail said: "This announcement represents a major step forward not just for these major offshore wind projects but also for the industry as a whole, as these lease agreements will strengthen our energy security, create jobs and support development of new UK supply chains. It demonstrates the continuing ability of the UK to attract billions of pounds in private investment due to the maturity of our world-class offshore wind market, which is enabling the redevelopment and regeneration of all areas of the UK, especially in coastal communities which need levelling up. Offshore wind is playing the leading role in the UK's transition to clean power, becoming the backbone of our future energy system, and helping us to reach net zero as fast as possible".

Sven Utermöhlen, CEO Offshore Wind of RWE Renewables, said: “The signing of Dogger Bank’s Agreements for Lease with The Crown Estate mark a significant step for both the project and RWE’s offshore wind growth ambitions. Through delivery of the Dogger Bank South projects and with one of the UK’s largest offshore wind pipelines, RWE is a major partner in helping the country achieve its net zero ambitions, generating clean, home-grown energy and securing domestic supply. With our more than 20 years’ industry expertise, RWE can ensure the Dogger Bank South projects are developed collaboratively with communities, and businesses whilst being sensitive to onshore and offshore environments.”

Philippe de Cacqueray, Managing Director, Renewables UK, TotalEnergies, said: “We are delighted to see our Outer Dowsing project reach a major milestone on its development pathway, an important step towards the UK’s target of reaching 50GW of Offshore Wind capacity 2030. The project represents a significant financial investment, but also an investment in time and skills, which will ultimately contribute to the UK’s energy transition and net zero ambitions, as well as TotalEnergies’ global ambition for 100GW of installed power generation from renewable sources by 2030. We look forward to working through the next stage of the development alongside our project partner, local communities and The Crown Estate.”

Mark Giulianotti, Head of Europe at Corio Generation, a Green Investment Group portfolio company, said: “We are incredibly proud to be developing Outer Dowsing, which will be one of the UK's largest offshore windfarms. This landmark infrastructure project will help form the backbone of our net zero energy system and bring investment and jobs to communities in Lincolnshire and the wider country. Signing the Agreement for Lease is a major milestone for the project and an important step towards reaching the government’s target of 50GW from offshore wind by 2030 and reducing the UK's reliance on fossil fuels."

Richard Sandford, Vice President of UK Offshore Wind, bp said: “I’m delighted our Morgan and Mona projects have reached another milestone in their journey to deliver 3GW of low carbon energy to the UK. I’m immensely proud of what the team has achieved with EnBW so far – delivering our largest ever integrated offshore wind survey, working with the local communities, engaging with the supply chain, and submitting scoping reports. All of this has led to today’s agreement and more importantly brings us one step closer to delivering enough low carbon energy to power the equivalent of more than three million UK homes.”

Holger Grubel, Head of Portfolio Development Offshore Wind, EnBW said: “EnBW appreciates to see the HRA process completed and we are happy to enter into the Agreements for Lease for our projects Morgan and Mona, which we are developing together with our partner bp. EnBW is endeavoring to de-carbonize electricity generation. With these projects, we are not only contributing to the UK government’s target of 50 GW offshore wind by 2030 but are also on target for our own ambition to become CO2 neutral by 2035. In the past months, we have established a strong project team and have progressed in aligning with key stakeholders, started the surveying and consenting activities and are in a good dialogue with National Grid regarding the grid connection. We appreciate reaching the AfL milestone with TCE today and we are looking forward to further working with our UK partners to realize our offshore wind projects in the Irish Sea.”

A spokesperson for project developers Cobra IS and Flotation Energy said: “With the potential to power more than half a million homes, Morecambe Offshore Windfarm will play an essential part in the UK journey to net zero. Signing the Agreement for Lease now, in early 2023, is a very significant step forward in the development of the Round 4 projects and is essential to achieving the UK Government’s 2030 target of 50GW of offshore wind.”